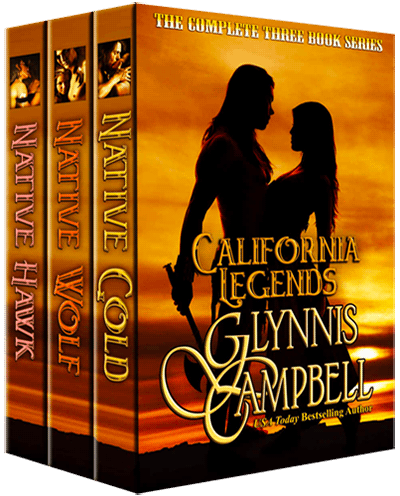 These are chronicles of the Old West – of the native people who lived on the land for generations and the pioneers who came from all over the world in search of riches – the struggle to survive in a land without laws – the strange bedfellows that resulted from the clash of cultures – and the common language of the heart that spoke of a love more precious than gold.

Book 1: NATIVE GOLD
A rebellious artist becomes a Gold Rush mail-order bride, but when fate makes her a widow, she’s tempted by a fierce native in whose arms she discovers a forbidden love more precious than gold.

Book 2: NATIVE WOLF
A half-native’s plans for vengeance backfire when he falls in love with the woman he kidnaps, who finds being stolen by a handsome savage a breathtaking adventure. A posse may be hot on the trail, but she’s not so sure she wants to be rescued.

Book 3: NATIVE HAWK
A half-native gambler on the run tangles with a spirited Italian beauty who takes his money and steals his heart, but the scheming young miss can’t resist the handsome gunslinger, even when she learns he’s a wanted man.