Books 1-3: The Warrior Maids of Rivenloch 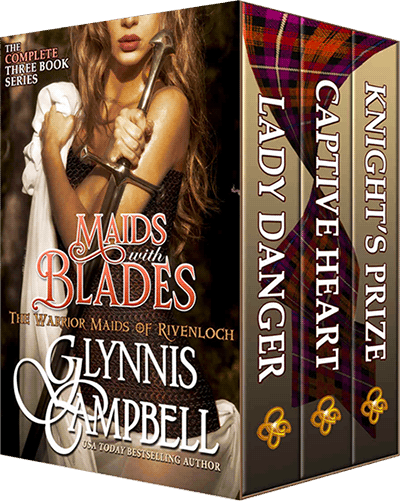 Damsels in shining armor…riding to the rescue!

Deirdre, Helena, and Miriel, three kick-arse Scots wenches known as The Warrior Maids of Rivenloch, aren’t about to become any man’s chattel, until they meet heroes who are strong enough to tame their wild ways and worthy enough to win their wayward hearts.

Book 1: LADY DANGER
A beautiful female warrior has never had trouble turning away men, but when she marries a powerful lord to save her sister, she soon finds herself losing the battle over her heart.

Book 2: CAPTIVE HEART
A fierce warrior maid tries to save her sister from marriage by abducting the groom’s right-hand man, a plan that goes awry when her hostage is all-too-willing to succumb to her demands.

Book 3: KNIGHT’S PRIZE
A lovely lady with a secret proves a welcome but dangerous distraction for a mercenary bent on hunting down the mysterious outlaw known as the Shadow.

The Warrior Maids of Rivenloch